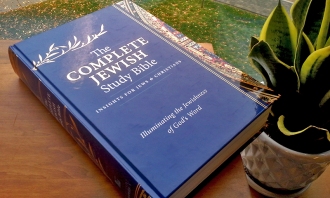 For the next four weeks, our office is reading through the book of Matthew (Mattityahu) in The Complete Jewish Study Bible. In case you missed the first post on why we’re doing this, here it is.

Here, we offer a few of our own thoughts and reflections on what we’re learning in our Bible book club.

We’d also love to hear what you’re learning in this reading of Matthew from The Complete Jewish Study Bible. (Don’t have your free copy of Matthew yet? Get it here!) Share with us and others on Twitter and Facebook! Tag us using #CompleteJewishStudyBible or #CJSBible.

Co-worker #1: I like that the notes point out when Matthew is reusing phrases from the Hebrew Bible, because that means he was alluding to those original contexts. For example, “This is the genealogy of Yeshua the Messiah…” mirrors “These are the generations (eleh toldot) of the heavens and the earth when they were created” from Gen 2:4 (and several other places in Genesis). To me, this signals that the introduction of Jesus’ genealogy carries the same weight of importance as the creation story for Matthew, and indeed the coming of the Messiah does signal a new creation. Because the New Testament is written in Greek, I don’t think I would have made that connection to the phrase from Genesis. That’s a cool parallel!

Co-worker #2: In the book of Matthew (or Mattityahu) of the CJSB, there is an interesting article in “The Tabernacle (Mishkan)” series titled “The Tabernacle and the Incarnation: Immanu El, God with Us.” On page 1383 (Matthew 1:23) in the CJSB, we read regarding Yeshua:

Today, in seeking to refute Matthew 1:23, Jewish theologians have sought to discredit the concept of a divine Messiah. However, evidence exists that this was not an uncommon messianic expectation. This is affirmed by modern scholarship…and among ancient Jewish sources such as Midrashei Geula (Midrashim of Redemption), which states, “In the future, the Holy One, blessed be he, will seat Messiah in the supernal Yeshiva [House of Study], and they will call him ‘Lord,’ just as they call the Creator.”

It is for this purpose that John 1:14 says of Yeshua, “The Word became a human being and lived with us.” The word dwelled from the Greek skene derives from the Hebrew Mishkan [Tabernacle], showing that in his incarnation Yeshua made his Tabernacle with his people. Thus through Yeshua, God did dwell with his people.

As we move from the time of Sukkot—the Feast of Tabernacles—into Advent and finally Christmas, let us remember the beauty and joy of what it means to await the Messiah and to find him in Yeshua, who lives and reigns now and always. In Yeshua, God really is with us. READ MORE…

Coworker #3: Passage: Matthew 3:2 “Turn from your sins to God, for the Kingdom of Heaven is near!”

In one of the footnotes for this verse, we learn the Hebrew word t’shuvah, which means turning, or returning. The Jewish understanding of repentance is that each individual must make t’shuvah, yet such requires God’s grace to be able to do it. In the NIV and KJV translations (I’m using this parallel Bible alongside the CJSB), the word “repent” is used in this verse. But I also love the visual imagery in the Complete Jewish Bible version. It makes it feel like there isn’t as long a bridge to cross—that God is close, and all we have to do is turn to him. I think that word—t’shuvah—helps me understand how God does not want us to delay, but to turn to him and keep moving forward in our journey of faith.

Co-worker #4: The notes do a great job of explaining what Jesus was saying about the Torah. Apparently, in the idiom of his day, “abolishing the Torah” meant “misinterpreting the Torah. And when he says he came to “fulfill” the Torah, it means “consummate,” not “terminate.” The note says, “Yeshua is here stating that it is not his intention to teach the Torah incorrectly, but quite the opposite, to affirm its fullness and truth by teaching all of it in a way that is true to its intended meaning.”

If you haven’t downloaded your free copy of Matthew yet, get it now!