As I write this, we are currently in the time (September–October) of Sukkot, or the Feast of Tabernacles. It’s something that many Christians may not be aware of (I had never heard of it until I visited Israel in the month of October many years ago). I happen to live near a synagogue, and on my way to church a few weeks ago, I noticed my Jewish neighbors constructing a structure of wooden beams, canvas tarps, and straw. Inside, they placed a large table laden with all kinds of good things to eat. After all, it is a festival—and a joyous one at that, especially as it follows right after the solemn observance of Yom-Kippur (the high holy time of repentance and atonement). The main point of Sukkot is to remind the Jewish people that God dwells with them and that he will always provide for them. How can his people keep from rejoicing! And what a beautiful reminder that God promises this to all his children, to all who call him Lord. He really is with us.

Over the past year or so, I had the honor of helping edit and produce The Complete Jewish Study Bible, which means I spent a lot of time immersed in this interesting and fresh Jewish perspective of the Bible. In my work on the project, I was constantly amazed at how many times Jesus (or Yeshua, as he is called in this Bible) clearly fulfilled the ancient prophecies concerning the Messiah. I was also amazed at the richness of the Hebrew Scriptures and how much I learned from Jewish rabbinic teaching over the centuries.

“The Word Became a Human Being and Lived with Us”

In the book of Matthew (or Mattityahu) of the CJSB, there is an interesting article titled “The Tabernacle and the Incarnation: Immanu El, God with Us.” This article is based on Matthew 1:23, which is an echo of Isaiah 7:14,

“The virgin will conceive and bear a son,
And they will call him ‘Immanu El.’”

Today, in seeking to refute Matthew 1:23, Jewish theologians have sought to discredit the concept of a divine Messiah. However, evidence exists that this was not an uncommon messianic expectation. This is affirmed by modern scholarship…and among ancient Jewish sources such as Midrashei Geula (Midrashim of Redemption), which states, “In the future, the Holy One, blessed be he, will seat Messiah in the supernal Yeshiva [House of Study], and they will call him ‘Lord,’ just as they call the Creator.”

It is for this purpose that John 1:14 says of Yeshua, “The Word became a human being and lived with us.” The word dwelled from the Greek skene derives from the Hebrew Mishkan [Tabernacle], showing that in his incarnation Yeshua made his Tabernacle with his people. Thus through Yeshua, God did dwell with his people.

As we move from the time of Sukkot—the Feast of Tabernacles—into Advent and finally Christmas, let us remember the beauty and joy of what it means to await the Messiah and to find him in Yeshua, who lives and reigns now and always. In Yeshua, God really is with us. 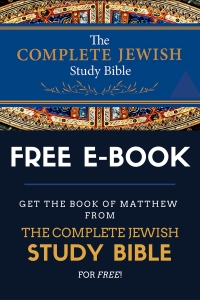 For more posts like this one, join our CJSB book club and get a free book of the Bible: Matthew (Mattityahu)! For four weeks blog posts will be put up, highlighting ideas from the reading that stood out to us here at Hendrickson or that we learned from! Sign up to receive the completely free ebook of Mattityahu here!

If you’d like more information about The Complete Jewish Study Bible, watch this video explaining “What is The Complete Jewish Study Bible?”, read this post where the cover designer explains her inspiration, or this blog series on three major Jewish holidays (Yom Kippur, Rosh-HaShanah, and Sukkot)! We also have two reviews of the Bible that will give insight as to its content: Daniel Greegor’s video review and John Kight’s review!

Here is the Wide Margin Edition of “Biblia Hebraica Stuttgartensia” (BHS): . . . The BHS is known to be the definitive edition of the Hebrew Bible. It is widely regarded as a reliable edition of the Hebrew and Aramaic scriptures and is the most widely used original-language edition among scholars. . . The Wide Margin Edition is identical in content to the Standard Edition but is larger in size and provides plenty of space for writing. It gives professors and students the opportunity to make notes in their Bible as they translate the Hebrew Scriptures! . . . 🔥🔥🔥 SALE! Get the Wide Margin Edition of the BHS for 10% OFF!!! 🔥🔥🔥 >>Link in bio! . . . #bibliahebraica #widemarginedition #biblicallanguages #brown #hardcover #hebrew #languageresource #languagereferencetool #biblicalhebrew #besthebraicreferencebook #quality #grammar #hebrewbible #oldtestament #reading #biblical #ancientlanguages #learning #scholar #student #church #pastor #bookstagram #welovebooks #books #students #hendricksonpublishers #hendricksonacademic #followus
Here is the 500 FOLLOWER GIVEAWAY!!! 🔥🔥🔥 . . . Thank you everyone SO SO much for 500 FOLLOWERS! . For this giveaway, you can enter to win ANY of these books photographed: 1.) Keep Up Your Biblical Hebrew Volume 1 (or 2) 2.) Keep Up Your Biblical Aramaic 3.) Keep Up Your Biblical Greek Volume 1 (or 2) . . . TO ENTER YOU MUST: 1.) Be following us on Instagram! 2.) Like this post! 3.) Comment down below which book you would like to win, and tag three people! . . . We will choose the winner tomorrow (Friday, 03/27/2020) at 2pm EST, good luck! . . . #GIVEAWAY #500followers #halfwaytoathousand #keepupyourbiblical #biblicalhebrew #biblicalaramaic #biblicalgreek #hendricksonbooks #biblicallanguages #bookstack #win #winner #giveaways #commentdownbelow #tagsomeone #likethispost #followus #entertowin #hendricksonpublishers #hendricksonacademic #biblical #languages #instagram
“Christianity in North Africa and West Asia” is a comprehensive reference work that covers key facts and analyses on every country in North Africa and West Asia, offering reliable demographic information and original interpretive essays by indigenous scholars and practitioners. It maps patterns of growth and decline, assesses major traditions and movements, analyzes key themes, and examines current trends. . . . Ideal for anyone studying North African and West Asian Christianity, this volume examines key themes such as faith and culture, worship and spirituality, theology, social and political engagement, mission and evangelism, religious freedom, gender, interfaith relations, monastic movements and spirituality, displaced populations, Christian media, and ecclesiology. . . . >>Link in bio! . . 🔥🔥🔥 THANK YOU FOR 500 FOLLOWERS!!! Stay tuned in the next couple posts for a possible GIVEAWAY! 🔥🔥🔥 . . . #newrelease #christianityinnorthafricaandwestasia #northafrica #westasia #globalchristianity #referencetool #geography #biblical #christianity #comprehensive #scholars #pastors #seminary #seminarystudent #greattools #ecclesiology #theology #culture #faith #worship #interfaithrelations #student #learn #hendricksonbooks #hendricksonpublishers #hendricksonacademic #followus #500followers
During this unprecedented season of chaos and anxiety, many of us are inclined to turn to the book of Job. . . . “Job: The Faith To Challenge God; A New Translation and Commentary” is a very fitting book during this time. It teaches us the raw spirituality of Job, his extraordinary faith, his friends’ theological errors, the mysteries of God’s speeches, and the unique answers to the problem of suffering. . . . >>Link in bio! . . . 🔥🔥🔥 ***The digital edition of this book is currently on sale at Logos.com (Save 33%)*** 🔥🔥🔥 . . Pre-order now at logos.com! 🖥 . . . #commentary #thebookofjob #oldtestament #faithtochallengeGod #theologybooks #theology #ministry #pastor #seminary #Godisgood #faith #newtranslation #translation #reflection #instabook #christianity #hendricksonacademic #hendricksonpublishers #followus #logos #sale #coronavirus #problemofsuffering #covid19 #godspurpose
Here is “The Gospel According to John in the Byzantine Tradition:” . . . Seeking to present a representative sample of witnesses in the Byzantine textual tradition from the fourth to the 14th centuries, this text-critical edition of the Gospel of John demonstrates the differences found within the most important Byzantine manuscripts. Dating to the 11th century, minuscule 35 is used as the base text, and comparisons to the Nestle-Aland edition are also listed. . . . “This is a text-critical edition of the gospel of John that reflects the recension of the gospel in the Byzantine tradition. Taking one particular MS as its ‘base text’ (miniscule 35) the edition then compares some seventy other witnesses. The differences between this text and that of Nestle-Aland are also noted. This is a painstaking work of scholarship coming out of the Centre for Editing Texts in Religion (now the Institute for Textual Scholarship and Electronic Editing) at the University of Birmingham. It is a highly specialized work, but for those interested in the history of the Byzantine textual tradition, or indeed the history of Byzantine Christianity more generally, obviously a very important one.” —Theological Book Review . . . >>Link in bio! . . . #gospelaccordingtojohn #germanbiblesociety #booktray #byzantine #byzantinetradition #textualtradition #gospel #history #christianity #religion #nestlealand #gospelofjohn #theology #tradition #manuscripts #11thcentury #basetext #gbs #hendricksonpublishers #hendricksonacademic #followus
“Septuaginta: A Reader’s Edition” offers the complete text of the Greek Old Testament as it appears in the Rahlfs-Hanhart revised “Septuaginta,” laid out in a clear and readable format. All deuterocanonical books are included, as well as all double-texts, which are presented on facing pages for easy textual comparison. . . . In order to facilitate natural and seamless reading of the text, every word occurring 100 times or fewer in the Rahlfs-Hanhart text (excluding proper names)—as well as every word that occurs more than 100 times in the Rahlfs-Hanhart text but fewer than 30 times in the Greek New Testament—is accompanied by a footnote that provides a contextual gloss for the word and (for verbs only) full parsing. . . Additionally, an appendix provides a complete alphabetized list of common vocabulary (namely, all the words that are not accompanied by a footnote), with glosses and (as applicable) comparison of a word’s usage in the Septuagint to its usage in the New Testament. . . . All of these combined features make “Septuaginta: A Reader’s Edition” an indispensable resource for biblical scholars and an excellent tool for improving one’s comprehension of the Greek language. In addition, each volume will include two ribbon markers. . . . >>Link in bio! . . . #septuaginta #septuagint #readersedition #greek #greekoldtestament #biblicalstudies #biblicallanguages #readingthebible #hebrew #readable #scholar #blackflexisoft #blueclothcover #ancientlanguages #ancienttexts #oldtestament #theology #seminary #seminarystudent #knowledge #reading #learning #booksbooksbooks #volumes #psalms #christian #christianbooks #ancienttexts #hendricksonpublishers #hendricksonacademic #followus