The modern man no longer feels himself a miserable creature, who has fallen from his original destiny, and no longer regards the earth as a vale of tears, which has taken the place of the original paradise. He can conceive nothing more wonderful than this beautiful world, which has evolved itself from the smallest beginnings and has reached its highest point of development in the grand and mighty human. He is in his own estimation no mere creature but “a creator and redeemer of himself and society.” More and more, he becomes his own providence.

“All of you young people who served in the war. You are a lost generation.”

Early on the morning of November 11, 1918, the delegates signed the agreement known as the Armistice. There were no handshakes. The Armistice took effect at 11 A.M. At that moment, the Times correspondent Edwin L. James wrote from the front, “four years’ killing and massacre stopped, as if God had swept His omnipotent finger across the scene of world carnage and cried, ‘Enough!’”[i]

November 11, 2018, marks the one hundredth anniversary of the armistice of the First World War. I won’t say the “end” of the war as there are some who argue that this war—“the war to end all wars”—actually never ended and that the hostilities aroused around the globe during that conflict still continue today.

This war—known as the “Great War,” until another war ignited the world twenty-one years later—began on July 28, 1914, sparked by the assassination of Archduke Franz Ferdinand of Austria and his wife Sophie, the Duchess of Hohenberg. On November 11, 1918, the war came to a slow and painful halt—but only after an estimated ten million soldiers and seven million citizens died as a result. Capping it all off was the 1918 pandemic of the Spanish Influenza, which took the lives of somewhere between 50 and 100 million people worldwide.

During this bloody conflict, almost the entire male generation born between 1883 and 1900 was annihilated. Those who managed to survive the horrors of trench warfare, mustard gas, and disease returned home maimed physically and/or psychologically. Almost everyone was maimed spiritually, as evidenced by the literature, art, and music of the postwar era of the 1920s.

After publishing his groundbreaking poem The Waste Land, T. S. Eliot became known as “the voice” of this “Lost Generation”  as Gertrude Stein coined it (also known as the “Generation of 1914” and the “Generation in Flames”).  The “powers that be” decided early on that the bodies of the fallen soldiers would not be sent home for burial, which led many families to disbelieve that their son, brother, husband was really dead—perhaps a mistake had been made. 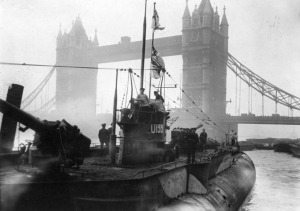 Unreal city,
Under the brown fog of a winter dawn,
A crowd flowed over London Bridge, so many,
I had not thought death had undone so many.

This lurking uncertainty morphed into unspoken, unresolved grief buried deep within repressed feelings.  Many of the soldiers who did return home were ghosts of their former selves, lost in a society that didn’t understand (or even acknowledge) shell shock or post-traumatic stress—which Virginia Woolf poignantly portrays through the tragic figure of Septimus Warren Smith in her novel Mrs. Dalloway.

But he himself remained high on his rock, like a drowned sailor on a rock. I leant over the edge of the boat and fell down, he thought. I went under the sea. I have been dead, and yet am now alive, but let me rest still; he begged (he was talking to himself again—it was awful, awful!).

If ever there was a senseless war, this was it. When it first began in August 1914, people thought it would be over by that Christmas. They had no idea of the cataclysm that had befallen humanity through its own hubris and blundering—the new and devastatingly effective weapons of machine guns, mortar fire, mustard gas, and disease-ridden trenches on all sides of “no man’s land.”

What I find extraordinary is that early in the twentieth century (and even the late nineteenth century) there was already a sense of this looming disaster. Some thought that drastic change was needed and that a war would actually help create a better society through destruction and then rebuilding. Herman Bavinck, however, saw in 1908 (when he gave the Stone Lectures at Princeton Theological Seminary) this dangerous state of affairs in science, philosophy, art, and even in theology and the church—predicting what was about to be unleased on an unsuspecting world. Not just with one war, but also with another that followed soon after.

As I’m sure you’ll be just as amazed at his assessment and predictions of the outcome of current-day ideas in 1908, I thought it would come best from Bavinck directly. Following, therefore, are excerpts taken from chapter 10 of this forthcoming book. (From the editors: “It is critical to note that Bavinck is being descriptive rather than prescriptive here. His various comments throughout this chapter are descriptive of various modern positions on eugenics, nationalism, and so forth. He will critique them at the end of this chapter, but it may seem to the reader as if he supports them here. He does not. Rather, he gives faithful renderings of the arguments of various scholars.”)

This earthly life is confidently declared the sole home of man; yet men seek even here below another and better dwelling. And therefore, there is

no lack of reformers who earnestly reflect on the miseries of this life and recommend ways and means not only for the deliverance but also for the perfecting of humanity.

In the first place, there is being made an attempt . . . to improve the racial qualities of humankind in an artificial way. . . . The Christian religion may offer in its doctrine of the inheritance of sin such a comfortless view; but this dogma—that the human is radically corrupt, must be saved by Christ, and can never become holy and happy by his own power—is the most demoralizing of all the articles of the Christian faith and ought to be opposed and eradicated with determined strength. . . . 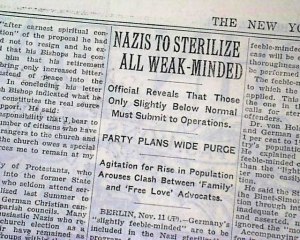 In its place must come the comforting conviction that man is still always becoming; he has already raised himself above the animal and is moving in the direction of the Übermensch. The evolutionary process, of which we have evidence all over the world, presses on not only forward but also upward to meet the light, the life, the spirit. . . .[T]hat is, the conscious, intentional, systematic work of man toward his own perfecting. But now we are faced by the fact that, as Karl Pearson [a proponent of social Darwinism and eugenics] expresses it, “the mentally better stock in the nation is not reproducing itself at the same rate as it did of old; the less able and less energetic are more fertile than the better stock.”. . .

Nobody can deny that such a deterioration takes place. . . . Therefore, it is 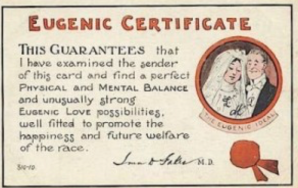 our duty to devote the greatest possible attention to marriage and to the people between whom it is concluded. . . . The state can at any rate begin to make medical inquiry obligatory before marriage, forbid marriage in definite serious cases, and so prevent the birth of unfortunate children. Artificial selection shows how genera and species may be modified among plants and animals; if this selection is applied also to the human race, it will promote its well-being and improvement in the highest degree.

. . . He who desires such a reform [for a new era for the human race] may, no doubt, make a beginning, but who knows what the end will be, and who can estimate the cost? Nonetheless, if such a reformation is to be wrought, it cannot be satisfied with a mere change in the system of education; it must proceed to a total rebuilding of society.

. . . What humanity confesses concerning Christ, and pronounces in its idea of divinity, is merely a symbol of what it finds in itself and what it is. Theology is mainly anthropology; the worship of God is humanity adoring itself. Comte, therefore, was quite consistent when he substituted the worship of humanity for the worship of God. . . . By banishing metaphysics, materialism has no longer an ethical system, knows no longer the distinction between good and evil, possesses no moral law, no duty, no virtue, and no highest good.

. . . The same fact also presents itself internationally in the mutual relations of the nations. The cosmopolitanism of the “Enlightenment” (Aufklärung)

was not only exchanged in the nineteenth century for patriotism, but this patriotism was not infrequently developed into an exaggerated, dangerous, and belligerent chauvinism, which exalts its own people at the cost of other nations. In its turn, this chauvinism was fed and strengthened by the revival of the race consciousness. . . . This race glorification acquires such a serious character and so far exceeds all bounds, that the virtues of the race are identified with the highest ideal. Deutschtum [“Germanness”], for example, is placed on a level with Christendom, and Jesus is naturalized into an Aryan in race.

. . . Though this [economic] competition still bears outwardly a peaceful character, it widens the gulf between the nations, feeds egoism, stimulates the passions, and may on the smallest occasion break out into a war which would surpass all previous wars in devastation. From a kingdom of peace, which shall embrace all nations, we are farther away than ever. . . . Just as many in the state are returning to monarchy and despotism and wish again to accord the first place in society to aristocracy and capitalism, so others in international relations defend the arming of nations, the conflict of races, and sanguinary [bloody] war. . . .

And though this diversity between nations and races may now and then cause a war, history proves that such a war has been a source of strength and welfare for many peoples, and for humanity as a whole. War is, according to [WWI Chief of the German General Staff Helmuth Johann Ludwig Graf von] Moltke, an element of the world order, as it is established by God, in which the noblest virtues of men are developed, such as courage and self-denial, faithfulness to duty, and self-sacrifice; without war the world would become a morass and would sink into materialism.

After laying out the alarming viewpoints of his day—and predicting the course of unthinkable events in the twentieth century (which had just dawned as he gave these lectures)—Bavinck concludes this chapter by turning to the final true word, the Christian hope in the face of such evil.

God is the creator and redeemer, but also finally the restorer and renewer of all things. . . . If there is ever to be a humanity one in heart and one in soul, then it must be born out of return to the one living and true God. . . . For the Christian, this dark world is always irradiated from above by the splendor of divine revelation, and under its guidance it moves onward toward the kingdom of light and life. Round about revelation are clouds and darkness; nevertheless, righteousness and judgment are the foundation of God’s throne.

As we struggle in our world today (even with many of the same issues as in the last century) and despair of ever seeing this restoration, renewal, or redemption, may we keep our minds, hearts, and thoughts focused on our only real hope: the True Word of God who takes away the sins of the world and grants us peace.

[i]Adam Hochschild, “A Hundred Years after the Armistice: If You Think the First World War Began Senselessly, Consider How It Ended,” The New Yorker, November 5, 2018.

Patricia Anders is editorial director of Hendrickson Publishers. She also serves as the managing editor of Modern Reformation magazine and is the author of A Winter’s Blooming (HNN Press, 2012).

For more information about Philosophy of Revelation, visit our website.

2 thoughts on “Herman Bavinck’s Philosophy of Revelation, World War I, and Trying to Be Our Own Creator and Redeemer”