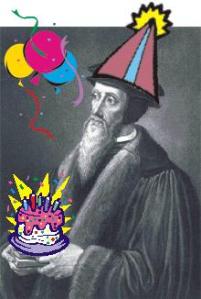 In honor of John Calvin’s birthday on July 10, I thought I would share his July 10 entry from Day by Day with John Calvin: 365 Selected Readings for Daily Reflection.

Calvin was born in 1509 in Noyon, France, and died in Geneva, Switzerland, in 1564 (the same year that William Shakespeare was born in Stratford-upon-Avon!). Although he was a prolific writer, his most important work (even still today) is The Institutes of the Christian Religion (1536). For more on his background, theology, and lasting impact on the church and society, I recommend The Reformation Then and Now: 25 Years of Modern Reformation Articles Celebrating 500 Years of the Reformation, edited by Eric Landry and Michael Horton.

Although there is much controversy and even animosity over some of Calvin’s more stringent doctrine, here in his book of daily readings, we enjoy a taste of his pastoral heart in encouraging believers with the love of God in Christ—something the children of Abraham had longed to see (literally!)—which was finally revealed through the incarnation.

“Your father Abraham rejoiced to see my day: and he saw it, and was glad.”

Faith has its degrees in beholding Christ. Thus the ancient prophets beheld Christ at a distance, as he had been promised to them, and yet were not permitted to behold him present—as he made himself familiarly and completely visible, when he came down from heaven to men.

Again, we are taught by these words that, as God did not disappoint the desire of Abraham, so he will not now permit any one to breathe after Christ without obtaining some good fruit which shall correspond to his holy desire. The reason why he does not grant the enjoyment of himself to many is—the wickedness of men for few desire him. Abraham’s joy testifies that he regarded the knowledge of the kingdom of Christ as an incomparable treasure and the reason why we are told that he rejoiced to see the day of Christ is that we may know that there was nothing which he valued more highly.

But if all believers receive this fruit from their faith, that, being satisfied with Christ alone, in whom they are fully and completely happy and blessed, their consciences are calm and cheerful. And indeed no man knows Christ aright, unless he gives him this honor of relying entirely upon him.

May we too be satisfied with Christ alone, fully and completely happy and blessed, our consciences calm and cheerful as we rely completely upon him!

Patricia Anders is editorial director at Hendrickson Publishers. She also serves as the managing editor of Modern Reformation magazine and is the author of A Winter’s Blooming (HNN Press, 2012).