Have you ever seen an archaeological headline that made a pretty fantastic claim? “We just found the prophet Isaiah’s hairbrush!” “Skeletons of horses in the Red Sea prove the truth of the Exodus!” When you’re scanning the news of the day with your morning cup of coffee, what are you supposed to think when you see headlines like this? You’d like some of them to be true, but you’re not an archaeologist—how are you supposed to form an intelligent opinion on these types of claims?

Enter Matthieu Richelle to the rescue. In the past, you’d have to understand French to read his handy little book, The Bible & Archaeology, but Hendrickson Publishers has had it translated into English and it is now available to the English-speaking world! (And in an up-to-date edition.)

Although I have a doctorate in Hebrew Bible, I am not an archaeologist, and what I retain from the one archaeology class I took mainly relates to a broad knowledge of major discoveries. I am thus indebted to Matthieu Richelle for this readable, balanced book that has taught me so much about the field of archaeology and how to assess archaeological claims in the news both intelligently and cautiously.

So, who is Matthieu Richelle? Dr. Richelle is a respected Old Testament professor who teaches at a Protestant seminary near Paris as well as at the Sorbonne, his alma mater.

One advantage to reading an introduction on the Bible and archaeology from a European Christian and scholar is that his approach is calm, balanced, and refreshingly removed from the American debates on this topic, which often involve more extreme, entrenched positions. His writing is accessible, his tone is reasonable, and he gets right to the point. The Bible & Archaeology, which is about 125 pages, is delightfully easy to read, digest, and finish.

And what exactly will you find in The Bible & Archaeology? A clear, comprehensible, intelligent introduction to what can (or can’t) be responsibly claimed by archaeologists.

A Basic Overview and Highlights

In the first two chapters, Richelle surveys exactly what it is that archaeologists are doing and the kind of information they can glean from their work. He gives lots of examples, so when you’re done with these chapters, you’ve already learned a lot about archaeological discoveries that shed light on life during Bible times. In Chapter 1, “What Archaeologists Discover,” you learn, for example:

In Chapter 2, “When Stones Speak,” Richelle talks about epigraphy (the study of inscriptions) and relays some crucial information:

Finally, note that several successive attempts are often needed to obtain a reading and a satisfactory interpretation. When an initial publication is made of the inscription, called the edition princeps, a researcher proposes a first attempt; this should then be followed by corrections and improvement by his or her colleagues in other articles. [1]

I didn’t realize that in archaeology, as opposed to the general humanities, where a scholar publishes a paper with the most fully formed and convincing argument that she can put together, quite tentative hypotheses are regularly published with the understanding that the archaeological community will help develop and correct the hypothesis in the form of additional published papers. This means that ideas that are later proved erroneous can be published in archaeological journals, and that you must read all the subsequent published rebuttals to follow the scholarly debate and get a sense of the value of a particular proposal. Thus, just because someone has published something in an archaeological journal does not mean it’s been vetted; rather, it’s just the beginning of the vetting process, it’s an archaeologist saying, “Hey guys, what do you think of this?”

Also, when you’re reading an epigrapher’s translation of an inscription, pay attention to the brackets!

When coming across the translation of such a text in a book about ancient Israel, the reader should be aware that words contained between brackets have no material basis; they are only hypotheses. That is when there are brackets, since in books for the general public it is not always the case, so as not to complicate the reading (author’s emphasis). [2]

This means that any words or letters contained within brackets are just the best guesses of the epigrapher, who may or may not have a strong bias towards a particular kind of translation. It also means that if there are no brackets at all, a little red flag should pop up in your head. Is this person trying to minimize the level of uncertainty in their translation?

The Limits of Archaeology

In order to be an informed consumer of archaeological news, it’s important to have a sense of the limits of what can be learned or gleaned from archaeological research. That way, when someone claims something that no archaeologist can responsibly claim, a little red flag can pop up in our minds. There are many important points on this topic in The Bible & Archaeology, and I don’t have room to list them all, but here are some that stand out:

It’s not always clear whether a site is Israelite or not! For example, Khirbat al-Mudaynah is situated right on the border of ancient Israel and Moab and it’s unclear to archaeologists which nation it belonged to. [3] You certainly can’t draw any conclusions about the life or society of a nation if you’re not sure which nation lived there!

Another problem is that archaeologists are often reaching conclusions based on interpretations, not raw facts. For, example:

In 2003, Norma Franklin maintained that she had found traces of the tombs of Israelite kings that had until then remained unnoticed in the plans of the palace of Samaria drawn by the architect of the archaeological team from Harvard University in the early twentieth century; the tombs were in the form of subterranean chambers. This would be a fine discovery. But David Ussishkin, one of the pillars of Israeli archaeology, went back over the records and published in 2007 a critique of this theory. According to him, the first “tomb” was in reality something else, whereas the second only existed in Franklin’s imagination, as a result of her erroneous reading of the plans of the palace. [4]

Oops! Richelle concludes, “The lesson one may draw from this is that it is often necessary to wait a few months or years before other analyses appear that are more sober and sometimes more correct.” [5]

Richelle also reminds us that archaeologists are studying ruins:

Take a town; destroy it; spread out the rubble; level the ground; then build another town on top; destroy this second city; repeat the process a dozen times. Leave the accumulated pile of rubble for a while; let it become overgrown…and now, arm yourself with a trowel and try to reconstruct the history of each of these periods! [6]

Archaeologists are working with mere fragments of the past, and they usually are only excavating a small section of a site, not the whole thing, which also limits what they are able to discover.

What Kind of Relationship Does the Bible Have with Archaeology?

In this chapter, Richelle lays out the range of approaches to understanding the relationship between the Bible and archaeology, some of which are “Archaeology, Servant of the Bible,” “Archaeology as the Only Historical Source,” and “Archaeology as ‘Judge’ of the Bible.” He advocates a balanced approach that keeps archaeological and biblical data separate and that is intellectually honest about what is conjectured and what is not. [7]

Regarding the fraught topic of “The Biblical Accounts as Historical Sources,” Richelle differentiates between the times when archaeology can confirm details in the Bible, provide similar things with which to compare elements of the Bible, illustrate things spoken about in the Bible, and complement what we know from the Bible. There are also contradictions between what archaeologists and the Bible claim, but Richelle reminds us that “before concluding that one or the other source—the Bible or archaeology—is wrong, we must remember that it is a question of interpretation and that our knowledge remains fragmentary.” [8]

To take all of this general advice and make it more concrete, Richelle uses the Kingdom of David and Solomon as an example, surveying all the discoveries that have been claimed to pertain to these ancient kings and guiding the reader through the different positions and arguments.

What I found fascinating in this section of the book is that while pottery usually provides an excellent way to date archaeological layers (because it is uniquely different in each time period), “The ceramics simply did not evolve fast enough during the early monarchy to allow a clear distinction between the tenth and the ninth centuries” [9] (that is, between David and Solomon—tenth century—and later kings—ninth century). [10]

As a result, archaeologists agree on the relative chronology (the order of the succession of the layers) but can theoretically have divergent opinions as to the absolute chronology (which consists of ascribing a date for each layer). While many archaeologists were content to ascribe certain monuments to the tenth century and therefore to David or Solomon, these structures could also, theoretically at least, date from the ninth century.

This means that there is not enough data to decisively tie certain archaeological discoveries to the time of David and Solomon, because it could very well apply to kings a century later. This makes it really hard to reconstruct the size of David and Solomon’s kingdoms or draw any other conclusions about their reigns from the archaeological record. This means, when you read a headline about something related to David or Solomon, unless the discovery includes an inscription that explicitly says “King David” or something like that, what the article is claiming is not for certain, no matter how convinced or convincing the archaeologist is.

This lack of certainty must be discouraging to some, but I agree with Richelle that “it is better to state that a theory is possible or plausible but not certain than to claim that it is definitively proven when the data do not actually furnish proof. This is the price of intellectual honesty.” [11]

“Archaeology and Writing in the Time of David and Solomon” 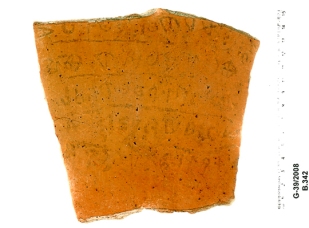 I must admit this is my favorite chapter in The Bible & Archaeology. Richelle walks the reader through all the different opinions on when writing became common in ancient Israel (and became common enough for the biblical books to be written). Throughout, he is logical and reasonable, and in arguing for the possibility that the biblical books could have been written earlier, rather than later, demonstrates how much skill, information, and context one must bring to the task of interpreting archaeological data.

Richelle leaves the reader with some concluding advice when it comes to being an educated consumer of archaeological news:

I will leave you with one final quote from Richelle regarding some of the claims archaeologists make: “On the other hand, some people regularly announce pseudo-discoveries that appear to spectacularly confirm the Bible but that in fact rely only on their imaginations. Neither the Jewish nor the Christian faith needs this kind of cheap apologetics.” [15]

Amy Paulsen-Reed is an Assistant Editor and Sales Representative at Hendrickson Publishers. She has a doctorate in Hebrew Bible from Harvard University, where she focused on Jewish biblical interpretation in antiquity. She lives in Gloucester, MA with her husband Michael and her daughter Lillian. She is a self-confessed language and grammar nerd, and enjoys cooking, baking, and napping in her spare time.

For more information about the fascinating book The Bible & Archaeology, visit our website.

One thought on “Deciphering Wild Biblical Archaeological Claims: An Introduction to The Bible & Archaeology”