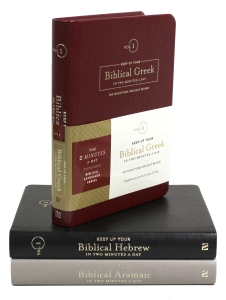 I started taking Biblical Greek in high school, so by the time I graduated from college, I was pretty good at it. Even when I wasn’t taking Greek classes, my former Greek tutor and I met every few weeks to have tea and sight read the Greek New Testament together. After college, I got busier. My former tutor and I dropped the Greek and used our time together for hanging out instead. I didn’t have classes anymore, but I was working and writing and maintaining my important relationships. It became clear that my life didn’t have space for the regular study of Greek—whether that study involved close attention to grammatical and exegetical details, with textbooks on hand, or the more basic upkeep of regular sight reading. I had a UBS Reader’s Edition, but I didn’t have time to use it, and with every passing day, the dream of reading the GNT comfortably with only the Reader’s glosses to aid me moved further out of reach. After a while my rustiness became its own barrier, because I would need a daunting number of reference works in order to struggle through even a few Bible verses.

I accepted that Greek’s role in my life was shrinking, that this wasn’t the moment for me to keep up my Greek. This was the moment to let it go and pray that my skills wouldn’t decay past the point of resurrection before I had the chance to use them again.

I’m sure that many people who’ve studied biblical languages have a story like mine. We had the best intentions, plans to keep the skills fresh, and friends to study with. After all, we fought hard to learn these languages. The slow loss of our skills is a bitter pill to swallow, but few of us have the time or a viable strategy to retain them. 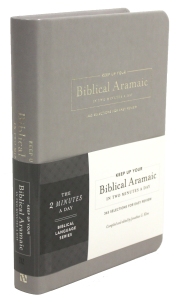 Anyway, Kline proposed the series, and I thought, I probably have two minutes a day. If he’s not lying about the time investment, these might be really helpful.

Now that the books exist, I’m happy to report the good news and the good news: He wasn’t lying and they are really helpful.

A brief disclaimer before I continue: I know that this is on the Hendrickson blog, and it’s obvious that I work at Hendrickson and am being paid to say nice things about 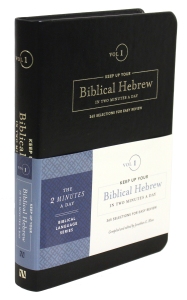 these books. But I’m legitimately thrilled that I got to help edit them and now get to both promote them and use them for my own edification. I know you can’t see or hear me to judge my level of excitement for yourselves, but I need to you to trust me, okay? I get to triumphantly present these books to my former Greek tutor now. I am over the moon about this.

The basic format of Keep Up Your Biblical Greek (and the other books in the series) is as follows: There are 365 days, and each day has a Bible verse in English, with three Greek words in parentheses (a new vocab word and two words from previous days). Then there’s a gray box with the word of the day and one or more glosses for it (the first volume of Greek and Hebrew each contain the 365 most commonly used words in the New Testament or Hebrew Bible, respectively, the second volumes have the next 365 most common words, and the Aramaic has all the Aramaic words in the Hebrew Bible). The word of the day is followed by the two review words, the Bible verse in Greek, and finally the English and Greek broken up into corresponding phrases or clauses. Day 160, below, should help you see what I mean.

Here are some things I love about these books. First, the blending of whole Bible verses (occasional exceptions were made due to space issues) with vocab is great, because while it’s important to be reminded of Greek vocab, it’s also important not to lose track of the fact that studying biblical languages isn’t about learning lists of words. It’s about getting closer to God’s word. Before this series existed, I would sometimes look over Greek vocab lists when I had a few minutes, because that was better than doing nothing. Unfortunately, seeing lexical forms of Greek words in isolation wasn’t getting me closer to reading the biblical text. In order to read, you need an understanding of how Greek words work together, as well as a familiarity with their morphology so that you can recognize them in their various forms. The Two Minutes a Day Biblical Language Series is all about helping you bridge the gap between studying vocabulary and reading the text.

By presenting the vocabulary words in their context and as they appear in the verse (in terms of morphology), Kline preserves the connection between the words and their source. You can see not only each word’s glosses, but also how the word is being used. For instance, here on Day 160 the word of the day is σῴζω, which is glossed as “to save, rescue.” But as you look at the English verse, you’ll note that σῴζω appears twice, and that the Modern Language Bible has translated it as “has healed” and “was well.” Neither of those meanings is listed in the glosses, but that’s one of the strengths of this format: you can see the word of the day in its natural habitat, interacting with other words, and that gives you more insight into its meaning and translation than simple glosses can.

Similarly, since the words in parentheses are presented as they appear in the verse, you can see what σῴζω looks like in three different grammatical circumstances: in its lexical form (first person singular, present active indicative), as σέσωκέν (third person singular, perfect active indicative), and as ἐσώθη (third person singular, aorist passive indicative). Depending on how rusty your Greek is, you may or may not have been able to do that parsing on your own (I consulted a lexicon). But even if you barely remember what parsing is, you’ve still seen σῴζω in three different forms, which gives you a fighting chance to recognize it in the future. 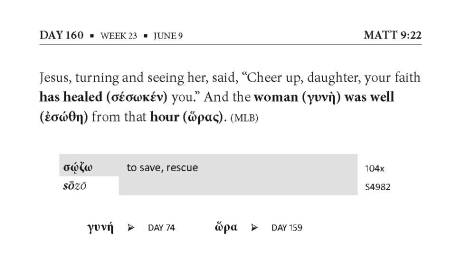 Tailor Your Two Minutes to Your Needs

As you make your way down the page, you’ll see the easiest sections (the Greek word with its definition and then the review words, which you’ve recently relearned and can greet as old friends) followed by the hardest (the whole verse in Greek). This is where you can get creative, depending on your level of rustiness. I consider myself rusty, but I’ve only been away from Greek for a couple of years, and I spent the last few months working on these books, which helped a lot. Thus, I don’t really need to study the vocab in the first volume. If I have two minutes and I’m trying to make the most of them, I’m going to read the English Bible verse, glance at the vocab, and then spend the next minute and a half looking at the Greek verse and the clauses, because those are what I need help with. If you’re significantly rustier, you can spend the bulk of your two minutes at the top of the page, with the English and the vocab, skip over the full Greek verse entirely, and briefly enjoy the clause breakdown at the bottom of the page, which will make the Greek much more manageable. The way each day is broken up into sections makes these books easy to tailor to your individual needs.

Initially, I considered skipping the first volume entirely, since there’s more vocabulary I’m unfamiliar with in the second volume. And you can do that if you want. But as I looked more closely at these books, I came to appreciate how each Greek verse can be an interesting challenge whether you need to relearn that day’s vocabulary or not. If you don’t spend a lot of time on the vocab, you have a larger percentage of the two minutes to spend with the rest of the Greek. You know the vocab words, but do you know all the words in the verse? Did you forget how weird Greek word order is? Aren’t you glad those clause breakdowns are there to bolster your understanding? I know I was.

Feeling Ambitious? The Case for More Than Two Minutes a Day

The next thing I need to say is a little delicate, and first, let me be clear about this: spending two minutes a day on these books can help you make real strides in keeping up your Greek (or Hebrew, or Aramaic).

However, spending, you know, a few more minutes, would help you make…bigger strides. I wouldn’t bring this up at all, because we’re all busy and it’s a miracle that you’ve made it this far into this post, not to mention spent two minutes or more studying a biblical language today…but it’s something else that I love about these books, so I have to talk about it.

It is not that two minutes is insufficient, or that the books do not deliver on their promises. It is simply that they’re constructed in a way that rewards deeper study. The aid they offer is there for the taking in two minutes a day, but if you have a few more minutes, you won’t run out of things to do. You can spend the extra time thinking about how the vocab words are parsed or declined, looking at how the clause breakdowns have been put together, or trying to figure out which Greek words that you don’t remember correspond to which English words they’re across from. Kline has put some additional suggestions in the prefaces, and I encourage you to give those a try as well.

The Two Minutes a Day Biblical Language Series is a great tool to help restore your Greek, Hebrew, or Aramaic vocabulary while preserving the biblical languages’ connection to the Bible so that you never forget what that vocab is leading you toward. The books are constructed in a way that’s useful to language learners anywhere on the rustiness spectrum. Whether you need a little help keeping your Greek fresh or you’ve forgotten even ὁ, ἡ, τό, Keep Up Your Biblical Greek in Two Minutes a Day (and its Hebrew and Aramaic counterparts) provides valuable aid. 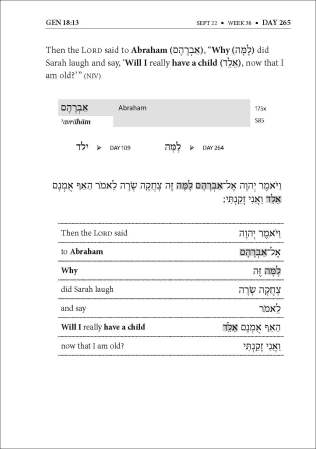 Tirzah Frank is an Assistant Editor at Hendrickson Publishers. She has a BA in English from Salem State University. In her spare time, she writes novels about dragons and eats an alarming number of dark chocolate peanut butter cups. 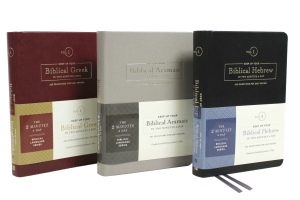 For more information about the 2 Minutes a Day Biblical Language Series, visit our website!

One thought on “The Two Minutes a Day Biblical Language Series: A Bridge between Learning Vocabulary and Reading the Bible”