If you’ve been in the stores recently, you’ve probably noticed that the Christmas stuff is gone, the Valentine candy is heavily discounted, and Easter baskets, plastic eggs, and pastel-colored candy now fill the shelves (with maybe a few shamrock items displayed nearby for a bit of Irish luck on St. Patrick’s Day). But between the “major holidays” of Christmas and Easter, we have the seasons of Epiphany and then Lent.

In these last days of Epiphany—which climaxes with Shrove Monday and Tuesday (or “Fat Tuesday,” Mardi Gras in French) before Ash Wednesday (March 1 in 2017)—let’s take a moment to focus on the celebration of Jesus Christ as he was revealed to the world during his earthly ministry. From the Greek word meaning “appearance” or “manifestation,” Epiphany is the joyful season that follows Christmas (which actually ends on the twelfth day of Christmas, January 5!). Following Twelfth Night festivities (complete with wassail and yule logs for the Anglo-Saxons among us), the Feast of Epiphany is celebrated on January 6 when Western tradition commemorates the arrival of the Magi (or wise men) to pay homage to the newborn king in Bethlehem (the Eastern Church celebrates Jesus’ baptism by John on this date). Because these men came from the east (that is, they were not Jewish), this is considered the manifestation—the revelation—of Jesus to the Gentiles.

Luther’s Sermon: “On the Visit of the Magi” 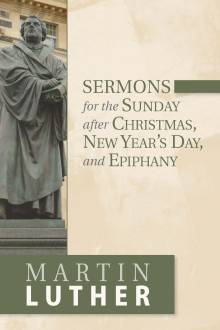 In his Sermons for the Sunday after Christmas, New Year’s Day, and Epiphany (forthcoming from Hendrickson in October 2017), Martin Luther preaches on the visit of the Magi as told in Matthew 2:1–12:

Now when Jesus was born in Bethlehem of Judea in the days of Herod the king, behold, wise men from the east came to Jerusalem, saying, “Where is he that is born King of the Jews? For we saw his star in the east, and are come to worship him.”

According to Luther, the wise men had seen the star of the king in their homeland and then set out. He doesn’t think the star necessarily guided them the whole way but pointed them in the general direction. Since Jerusalem was the capital city of Judea, they naturally stopped there to make their inquiries. King Herod was troubled when he heard about their visit (as was “all Jerusalem with him”) and the birth of this other king. He called together the chief priests and scribes to find out where the Messiah was to be born, which they found written in the prophet Micah,

“And thou Bethlehem, land of Judah,
Art in no wise least among the princes of Judah:
For out of thee shall come forth a governor,
Who shall be shepherd of my people Israel.”

Micah continues, “Whose goings forth are from of old from everlasting.” As if he would say, I proclaim the ruler that shall come out of Bethlehem, but he does not there begin to be; he has been already from the beginning before the world began, in that no day or beginning can be named in which he did not already have his being. Now from all eternity and before the creation of the world there existed nothing but God alone. Hence the going forth from everlasting could not be by one person only, for going forth signifies that there was someone from whom he came forth. Hence Micah proves that this ruler must be God’s own true Son, born of God the Father, and that the one true God must be with him eternally before all creation began.

When the wise men approached Jerusalem, Herod called them in. They soon discovered that this newborn king was not in this royal palace where they had perhaps expected, but they did learn about this prophecy concerning Bethlehem. After they “heard the king,” they “went their way.” Luther here makes the point that they did not agree to return to the king and report what they find (and, of course, they were later warned in a dream not to go back that way). He says they merely “heard the king” and left.

And lo, the star, which they saw in the east, went before them, till it came and stood over where the young child was. And when they saw the star, they rejoiced with exceeding great joy.

Regarding this passage in Matthew, Luther speaks to the heart of the Reformation: sola scriptura, solus Christus—scripture alone, Christ alone:

It seems strange, however, that the star reappears to them now when they do not need it any more, when they know the town of Christ’s birth, while it was hidden before, when they needed it and knew not the town. But this was done to strengthen their faith….It was diligently prevented that the wise men should find Christ through themselves, or men. On the contrary, they found him alone through the Scriptures of the prophet and by the aid of the stars of heaven that there might be put to naught all natural ability, all human reason, all light outside the spirit and of grace….But the Scriptures and divine light must reveal him, as [Christ] says in Matthew 16:17, “Blessed are thou, Simon Bar-Jonah: for flesh and blood hath not revealed it unto thee, but my Father who is in heaven.” With this, Christ distinctly casts aside flesh and blood with its revelation, i.e., man and all human wisdom, which, being nothing but darkness, cannot reveal Christ.

The three Magi by Hendrick van Balen (1615); Taken from Wikicommons

The wise men rejoice to see the star, but it leads them to a humble abode. When they find the infant Jesus, they fall on their knees and worship him. While others may consider them to be fools for doing such a thing, Luther says, “This was a strong faith indeed, for it casts aside many things which impress human nature.”

Other Manifestations of Christ as the Son of God 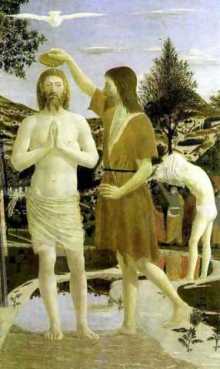 While this story depicts the revelation of Christ as the Son of God to the Gentiles, and hence to the nations, we see other manifestations of this in the Gospel narratives, such as when John baptizes Jesus in the Jordan River: the heavens part, the Spirit like a dove descends upon Jesus, and a voice from heaven says, “This is my beloved Son, in whom I am well pleased.” Throughout the next three years of his earthly ministry, Jesus Christ’s divine Sonship is also manifested through his many miracles, starting with his creation of top-quality wine from mere water at the wedding feast in Cana and culminating with raising Lazarus from the dead.

Another powerful manifestation takes place at Jesus’ transfiguration as witnessed by Peter, James, and John—when his clothing turns a brilliant white, and they see him talking with Moses and Elijah. As the disciples watch (and Peter fumbles around nervously, muttering something about building three shelters), they hear a voice proclaim, “This is my Son, whom I love; with him I am well pleased. Listen to him!”

Immanuel, God with Us

Before we focus on Christ’s crucifixion and celebrate his resurrection in Holy Week and Easter Sunday, let us rejoice in these last few days of Epiphany. Now we joyfully celebrate the manifestation of Christ as God the Son incarnate, who is God with us, Immanuel; the King of kings and Lord of lords, in our midst, revealing the kingdom of God to us through his teaching and his actions, the Lamb of God who takes away the sins of the world. He is a light to the Gentiles, the living water, the bread from heaven, and the resurrection and the life.

Patricia Anders is editorial director at Hendrickson Publishers. She also serves as the managing editor of Modern Reformation magazine, teaches Aesthetic Aspects in Literature at Gordon College in Massachusetts, and is the author of A Winter’s Blooming (HNN Press, 2012).

One thought on “The Manifestation of Christ to the World”