As the publication date for the Septuaginta: A Reader’s Edition and the academic shows approach, we’re excited to reveal to you this exclusive Q&A with the editors: Will Ross and Greg Lanier. The pair has exciting background information on the LXX to share, along with helpful advice for those of us who are intimidated by the idea of reading the Old Testament in Greek. Enjoy!

1. What made you decide to create Septuaginta: A Reader’s Edition?

Greg: We were both early in our PhD work and had benefited from other similar “reader’s editions” (for the Hebrew Bible and Greek NT), which helped us develop our abilities in the languages and our familiarity with the Scriptures. After SBL in 2014, we exchanged emails that amounted to, “Why hasn’t anyone done this for the Septuagint? Why not us?” We reached out to a few people to start the process, and we quickly began work on Genesis soon thereafter.

Will: In addition to what Greg said above, I would add that I was also motivated by my doctoral work, which focused on Septuagint lexicography. The idea of reading carefully through the entire Septuagint corpus and assessing the meaning of a large portion of its vocabulary was appealing (if daunting) because it was so directly relevant to my research.

2. What do you hope this edition will do for readers?

Greg: We have a few goals for our target audience. First, we hope that this becomes the resource-of-choice for those who want to interact with the Septuagint on a regular basis. While no doubt Rahlfs-Hanhart will remain useful, we believe this edition makes that text far more accessible. (Scholars interested in doing more extensive text-critical work will, of course, continue to use the Göttingen and Cambridge editions—but we hope this book will help seasoned scholars read for enjoyment, too). Second, we hope it helps students of both the OT and NT (as well as early Judaism and Christianity) have a less intimidating way of interacting with a set of Greek writings that are immensely important for those fields. Third, we hope readers will grow in their competency with Hellenistic Greek as they read lots of it!

3. Why is it important to read the Septuagint?

Will: There are a lot of ways to come at this question. I’ll point out three main areas here, although there are certainly more.

First, the Septuagint is a huge and diverse corpus of post-Classical (“Koine”) Greek. So naturally the more we read and become competent with its language, the better equipped we will be to understand and interpret the New Testament, which was written in the same language. That last statement may seem obvious, but it is actually very often misunderstood or ignored.

Second, although it is incorrect and potentially misleading to say that “the Septuagint” was “the bible” of the New Testament authors, it is certainly true that versions of Israel’s scriptures in Greek were of paramount importance within the Jewish and early Christian communities in the first century Palestine and beyond. So the more we read that Greek version (broadly considered, “the Septuagint”), the better prepared we are to understand the theological and textual context of the authors of the biblical and para-biblical literature.

Third, the Septuagint presents us with an extremely early interpretation of the Hebrew Bible that contains much that is insightful and sometimes puzzling, and so it repays the attention we give it. I will also mention that the Septuagint is also a witness to an ancient understanding of the Hebrew language that is not always contiguous with contemporary scholarship. I think there’s a lot more work to be done on that topic.

4. Can you walk us through your basic process of creating and checking the apparatus?

Greg: We divided the books essentially 50/50 between the two of us. One of us would do the initial editing using the following process:

The other person would then proofread these drafted chapters, checking for accuracy of glosses, parsing details, etc.

Once a book had been drafted and proofed, one of us did a final check on the entire book. We then turned it over to Hendrickson to typeset. Each chapter was then scoured by Jonathan, Phil, and Tirzah.

One of the major challenges was ensuring accuracy over such a massive project (involving 1,175 chapters and 125,000 footnotes, spread out over four years of work). Despite the best efforts of all of us, no doubt there are some errors or glosses that could be improved. We’ll be launching an online errata tracker on the book’s website in a few weeks so that readers can log things they spot. But we feel good about the quality of the final output.

5. What feature or reader aid are you most excited for people to see?

Greg: I’ve been using a pre-print version with my students this fall and comparing it with Rahlfs-Hanhart. What they’ve enjoyed the most is the pleasing textual presentation (font size, English headers, paragraphing) and the ready access of the vocabulary glosses, which has made their reading much more productive.

Will: I would second what Greg said about the presentation on the page. I would also add that I think the quality of the physical volumes is just stunning. People will love holding these well-crafted tomes in their hands—if not lugging them from place to place!

6. Do you have a favorite grammatical element or translation nuance that you stumbled on while poring over the Septuagint?

Greg: I did the initial draft of Genesis, and the peculiarities of the translation of 3:15 has been fascinating to look into; it led to a few spinoff projects, which is always fun.

Will: I try not to pick favorites with the Septuagint! One word I always enjoyed glossing simply because it is so slippery is σκεῦος, which is what linguists call a shell noun, similar to the English words “thing” and “stuff.” I’ll be commenting more on this particular semantic issue in our joint paper at SBL this November. Honestly, though, I have a document with a long list of curiosities and project ideas to pursue in due course that sprung up in the course of producing the Reader.

7. What book or passage was most difficult to complete, and why?

Greg: It’s a tie between Wisdom of Solomon and 2 Maccabees (with 4 Maccabees close behind). Though Sirach was no laughing matter, due to its length.

Will: Yeah, I still have nightmares about 2 Maccabees, and not just because the Greek is really tough.

8. Do you have any words of encouragement for people who want to branch out from NT Greek, but find the Septuagint daunting?

Greg: Take up and read! Just try. One of the most encouraging things I’ve seen in the two rounds of my course on “Septuagint Readings” is how students with NT familiarity start to have light bulbs go off as they read the Greek OT. They see phrases and terms used by, say, Paul (drawn from the Pentateuch or Isaiah or Psalms) in a whole new light.

9. In a similar vein, are there any Septuagint books or passages that are especially smooth transitions from NT Greek (i.e., good places to start)?

G&W: the Pentateuch, Historical Books, and Psalms are a great place to start.

10. What projects are you tackling next?

We’re collaborating on a follow-on project with Hendrickson (yet to be announced) that will complement the Reader and hopefully make it even more useful.

Greg: I’m also working on a lengthy project (with Hendrickson) involving the study of early Jewish texts that are important to the field of messianism/early Christology; a short introduction to divine Christology; and a commentary on Luke.

Will: Aside from the project Greg mentioned, I am co-editing a handbook on research issues and methods for Septuagint studies, which should be published in 2019. I’m also working on getting my dissertation published soon, along with a volume of essays (edited with Steven E. Runge) dealing with cognitive linguistics and Greek prepositions. 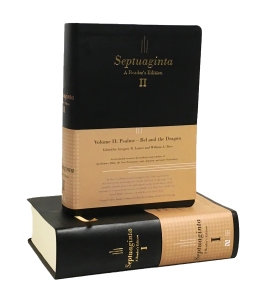 To preorder the Septuaginta, visit our website. For more information about Will and Greg or the Septuaginta (along with a bunch of other really interesting blog posts), check out their blog.